Candy was a smash hit as one of the hosts on Aboriginal Day Live – National LIVE Televised music festival, celebrating National Aboriginal Day – live from Winnipeg and from Regina. Candy is Canada’s only First Nation, gay woman,stand-up comedian that has her own national prime time TV series, The Candy Show, that airs Thursday nights on APTN & APTNHD, as well as many other times throughout the week. Season 3 is currently in post-production, and will air later this winter.
On set of Candy’s show, The Candy Show, she conducts all her interviews of the Musical guests, in her giant big pink bed. APTN had a replica built of this big pink bed and a smaller stage built for Candy specifically to interview musicians on Aboriginal day LIVE – including, Inez and Joey Stylez.
WE have attached a handful of pictures from the night’s event. Please check out APTN & APTN HD to catch the replay of Aboriginal Day live broadcast – they usually replay it several times until next years broadcast.
Candy is the ultimate Canadian Entertainer – her very unique comedy style is not found on Yuk Yuk’s stage, or other smaller comedy stages. Candy Palmater’s stand up comedy is one of a kind, unique and absolutely hilariously funny! Young or older, everyone LOVES Candy. My dare – try not to laugh, come on , I dare you.
You can find Candy on Facebook, Twitter, Instagram and of course YouTube!
Check her her awesome videos, some comedy, some rants, some make-up, some book reviews. if you have something you want Candy to rant about, please leave us a message through the website and let us know.

Here are a few pictures during rehearsal from the forks in Winnipeg June 22nd, for the big event June 23rd.  The National Televised event will draw many thousands of people to Winnipeg and Regina locations.  You can sit in the comfort of your own home and watch everything happening as it happens. Co- Hosted by Candy Palmater ( Canadian aboriginal host/ emcee), she will be interviewing the musicians on her set on stage in the big bed.

Yes, this is correct.  APTN’s largest LIVE televised event is June 23rd and you can watch it on National TV, APTN, as it happens, live from Winnipeg and Regina.  Watch Candy ( of The Candy Show) host/ interview all the musicians on the stage in Winnipeg from her big pink bed replica, like the bed on set of her National TV show, which will be on stage.  Thousands of people will be gathered for the great event, tons of great aboriginal musical guests will rock the stage at the forks.

Set your DVR if you are not home, this is something you do not want to miss.

National Aboriginal Day is a day recognizing and celebrating the cultures and contributions of the First Nations, Inuit and Métis peoples of Canada.[1] The day was first celebrated in 1996, after it was proclaimed that year by then Governor General of Canada Roméo LeBlanc, to be celebrated on June 21 annually. Most provincial jurisdictions, however, do not recognise it as a statutory holiday.

The day of recognition came about after a series of calls for such a celebration. In 1982, the National Indian Brotherhood (now the Assembly of First Nations) called for the creation of a National Aboriginal Solidarity Day to be celebrated on June 21. Slightly more than a decade later in 1995, the Royal Commission on Aboriginal Peoples recommended that a National First Peoples Day be designated. Also in that same year, a national conference of Aboriginal and non-Aboriginal people chaired by Elijah Harper, titled The Sacred Assembly, called for a national holiday to celebrate the contributions of Aboriginal peoples to Canada. June 21 often coincides with the summer solstice.

The above text was taken from Wikipedia.org – for more information.

Today Candy is performing on stage at Chippewas of The Thames First Nation in Ontario.  Then Candy heads to Winnipeg for Aboriginal Day Live!  stay tuned for more….

Hosting from her replica big pink bed from the set of The Candy Show, Candy Palmater will interview all musical guests on stage in Winnipeg this June 23rd. Televised LIVE on APTN. ( check your local listings for air time in your time zone). 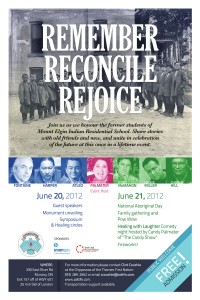